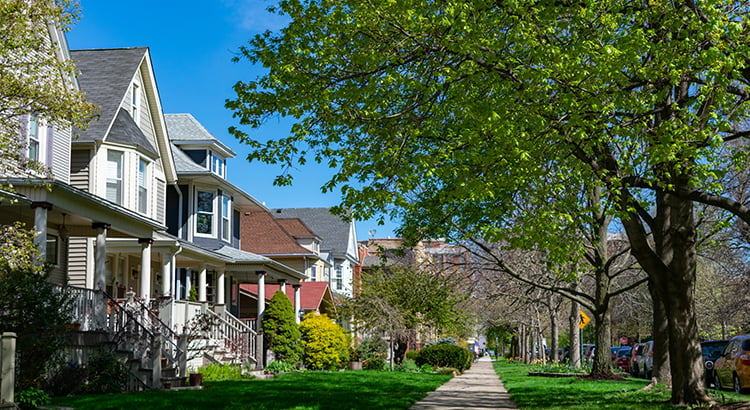 You might believe that this is a housing crisis given the media's constant coverage of the housing market's movement. It's only normal for those thoughts to surface, making you believe that what happened in 2008 might be repeated. The good news is that there is hard evidence demonstrating why this time is different from the last.

There are still not enough homes available on the market, not even a surplus.
For historical context, during the housing crisis, there were too many properties for sale (many of which were short sales and foreclosures), which led to a sharp decline in property values. Despite an uptick in supply since the beginning of the year, there is still a lack of inventory overall, largely because homes have been underbuilt for over 15 years.

The graph below compares the months' supply of homes available presently to the crash using information from the National Association of Realtors (NAR). At the current sales pace, unsold inventory has a 3.2-month supply, which is much less than it had previously. Even while some overheated markets may see minor drops, there just isn't enough inventory on the market for home prices to plummet as they did the last time. 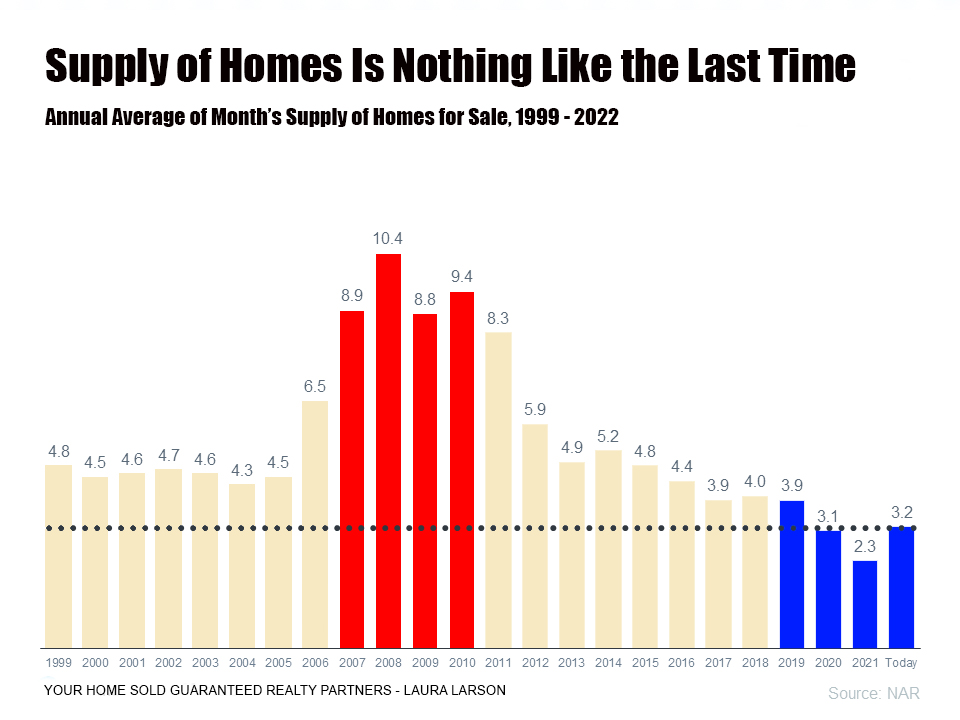 Back then, mortgage requirements were far looser
It was considerably simpler to obtain a home loan before the housing crisis than it is right now. Up until 2006, banks were inflating demand by decreasing lending requirements and making it simple for almost anyone to be approved for a home loan or refinance their existing home.

Lending institutions back then assumed significantly more risk in terms of both the applicant and the mortgage products being supplied. As a result, there were several defaults, foreclosures, and price drops. Things are different now, and mortgage providers have considerably stricter requirements for buyers.

The Mortgage Bankers Association (MBAMortgage )'s Credit Availability Index (MCAI) data is used in the graph below to illustrate this point. The easier it is to obtain a mortgage, the higher the index number. It gets harder the lower the number. The index dropped by 5.4% in the most recent report, indicating tighter requirements. 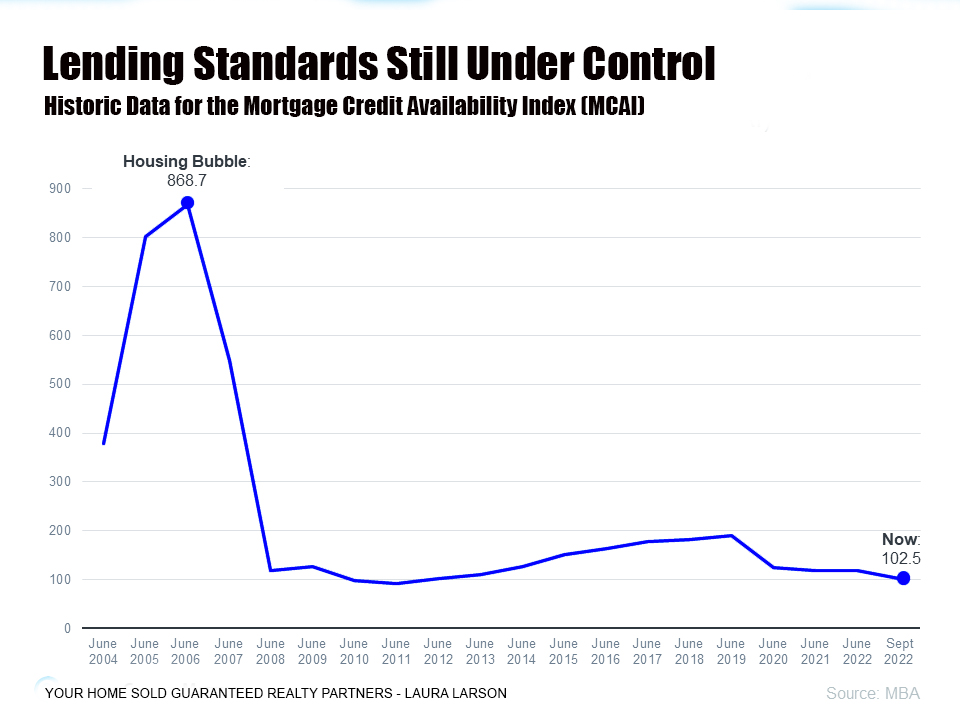 This graph also demonstrates how much has changed since the peak in loan availability before to the crash. A scenario that would have caused a wave of foreclosures similar to the last one has been avoided because to tighter lending regulations during the past 14 years.

The Number of Foreclosures Is Not What It Was During the Crash
The number of homeowners who were threatened with foreclosure when the housing bubble burst is another difference. Since the crisis, there have been fewer foreclosures, partly because today's purchasers are more qualified and less likely to fail on their loans. The graph below illustrates how different things are this time around using data from ATTOM Data Solutions: 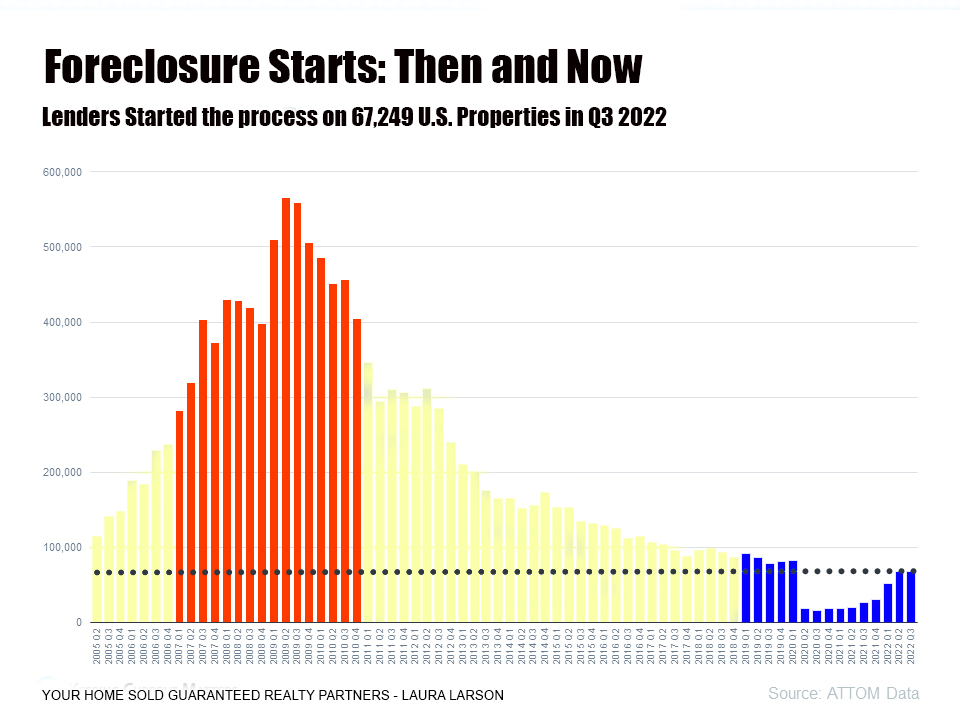 Not to mention, there are solutions available to homeowners today that just weren't available during the housing crisis, when so many individuals owed more on their mortgages than their homes were actually worth. Many homeowners today have significant equity. The way in which property prices have increased over time is a significant contributor to that equity. ContinuityLogic claims: “The total average equity per borrower has now reached almost $300,000, the highest in the data series.”

Rick Sharga, Executive VP of Market Intelligence at ATTOM Data, explains the impact this has: “Very few of the properties entering the foreclosure process have reverted to the lender at the end of the foreclosure. . . . We believe that this may be an indication that borrowers are leveraging their equity and selling their homes rather than risking the loss of their equity in a foreclosure auction.”

This proves that this time around, homeowners are in a completely different situation. Many people who are struggling today have the choice to sell their homes using the equity they have built up instead of going through the foreclosure process.

Bottom Line
If you’re concerned we’re making the same mistakes that led to the housing crash, the graphs above should help alleviate your fears. Concrete data and expert insights clearly show why this is nothing like the last time.

To continue searching, you must agree to the Terms of Use.

For the best experience, please provide your cell phone number and select accept below to opt-in to our Terms & Conditions and Privacy Policy to begin receiving text and voice communications.

or make a new notebook

See local market activity affecting the value of
your home & maximize your investment.

We just need your phone number to finish creating your account.